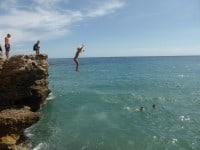 Life as a working mum can often feel like throwing yourself off a cliff (as I'm doing on holiday last summer here!). We all know that. Indeed, the fact that being a working mum is tough is becoming one of the most blatant truths of modern life. I’ll never forget the wonderful opening scene in Allison Pearson’s ‘I don’t know how she does it’ where the mother is bashing the Sainsbury’s mince pies to try and make them look homemade and it remains an eternally fascinating question why women in particular feel so very guilty about leaving their children to do something as honest, necessary, and indeed worthy as earning a living. And this, I think, is particularly tricky for the self-employed.

We go into working for ourselves full of the benefits of flexible hours and controlling our own timetable to work around our little darlings and this is a huge benefit BUT very few jobs are that flexible, especially as you get more successful. There will always be meetings or events or deadlines that mess with the domestic idyll and that’s when it starts to really get tough.

I’m a writer. For years when the kids were small I wrote short stories for the women's magazines because I could fit that into the small naptime/playgroup/playing-with-friends segments in my day. It was hardly lucrative but it helped and it kept my mind active and my writing skills honed. It was, however, very much secondary to the kids.

My dream was to become a published novelist and this year – hooray! – I achieved that when The Constant Queen, the first book in my Queens of the Conquest trilogy, was published by PanMacmillan. I’m over the moon about it but it also means that it’s time to get serious about my work. I have a window now to try and make a success of this and I have to seize that. Indeed, I want to seize that. There’s only one tiny problem – suddenly the kids can’t always come first and maternal guilt is raising its perennially eager head more and more often.

My children are older now – 13 and 11 – and largely able to fend for themselves, which helps a lot but I’m still painfully aware that not paying them enough attention in these vital teenage years could lead to some serious problems. I’m aware, too, that their own insistence that they’re ‘totally fine on our own’ is not always to be believed. In some ways, teenagers need more attention than toddlers. Plus, they’ll be gone all too soon and I don’t want to miss out! Don’t get me wrong – I’m hardly Paula Hawkins or EL James, catapulted into stardom and jet setting around TV studios and top-level literary festivals at every hour of the day. On the whole my few bookshop events and library talks are more than manageable but there are still times when, as for any working Mum, it all starts to feel dangerously out of control.

Do we worry too much these days? Probably. Kids are resilient creatures and pretty independent ones too, if we let them. There are certainly many, many things more likely to create lasting psychological damage in a child than letting themselves into the house after school! But if you’re making the decisions about how long you work – as you do when you’re self-employed - it’s all too easy to torture yourself over whether you’re doing it right.

When the chips are down, obviously my kids are going to come first. I’d drop everything if they were seriously hurt or heartbroken or stranded somewhere. That's a no-brainer. But it’s not always that easy to see if the chips are actually down or not. Are they down when it’s the third night in a row that you’ve left them home alone to do author talks? Are they down when they have to wait ages after sports club to be picked up and are late to bed – again? Are they down when they need help with their homework but you’ve got a deadline to hit? The crises are straightforward; it’s the day-to-day juggling act that’s tough. 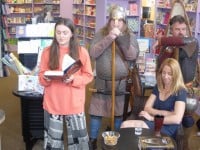 I’ve worked for years and years to get this publishing deal and now I have it I’m determined to do everything I can to try and make it work. I owe that to myself but also to my family, not just for the money (fortunately!) but to show my kids that it’s important to have goals in life and to work to make them happen. I want them to be proud of what I do and to see that you have to graft to get where you want to be - but I also want to be there to cuddle them after a tough day at school and that’s sometimes the tricky bit.

This is hard for every working Mum but it can be even harder if you’re self-employed because it’s not some easily blameable ‘mean boss’ making you work yet another evening/Saturday but yourself. I choose to be out working and therefore, by implication, I choose working over my children. Obviously it’s not as clear-cut as that and my family are really supportive (the picture shows my stepdaughter reading from The Chosen Queen at my launch - a lovely moment), but it’s hard to ruthlessly pursue your own life when other small, vital, hugely important lives also rely on you.

I once met a writer early in my twenties who told me she’d decided not to have children so she could concentrate on her writing. It would be too hard, she said, to do both. Sometimes, now, I look back to that and I really, really think she was right but then I try and imagine life without my kids and there are holes in it way too big for even a booker prize to fill.

I wanted to be a mother every bit as early as I wanted to be a writer and I love it. So I’ll take the hardship, thank you and I’ll keep juggling and keep doubting my choices on a daily basis – as all mothers do – and just pray that loving them to bits makes up for the occasional (OK, regular) panics over pick-ups, packed lunches, clean sports kits, impressive drama costumes, home-made birthday cakes, eating vegetables….
God bless mothers (and if He could banish guilt too, that’d be even better)!