Little kids are so brilliantly seasonal, aren’t they? Not in that they only ripen at a certain point in the year – on the contrary a toddler can bring a tantrum to fruition at any time of the year, day or indeed night – but in that they embrace the markers of the turning year with such joyous enthusiasm.

I miss having little ones in Autumn. I miss their wicked glee in Halloween and the light in their eyes as they get to write their name in the air with a sparkler. I miss the way kicking orange leaves up into the air will make them laugh and laugh. I miss how cut they look in those snuggly all-in-one suits (always rather wanted one of those!), with fluffy hats on their heads and noses pink from the cold as they burrow them into your neck. Above all, I miss their effortless belief in the magic of Christmas.

Don’t get me wrong, I love my teenagers. I love what great company they can be over dinner. I love the way they challenge me and the questions they pose about the world. I love the exciting things they’re doing with their lives and, yes, I love seeing them head out to party with their friends. They’re great. But they don’t believe in Santa any more and that makes it harder for me to do so as well.

I remember the first Christmas my husband and I discovered Norad’s fabulous ‘Santa Tracker’. Our kids were small and entranced by ‘actually seeing him’ on Christmas Eve. Getting them to bed was a doddle once Santa took a fortuitous turn Northwards and we could point out that he was heading our way. After placing mince pie, carrot and sherry on the hearth together, we tucked them up with stockings on their feet and anticipation shuddering through their exhausted little bodies and smiled. Two hours later, amidst the last-minute wrapping and Santa-sherry drinking, we were both still rushing to the computer (this was pre-smartphone) to see where Santa was. I swear when he hit Paris we actually worried we’d still be up when he dropped down the chimney and we hurried to bed with a not insignificant amount of anticipation ourselves. Magic is infectious.

So, yes, I miss little kids at this time of year. I spent bonfire night half-watching someone else’s fireworks from a car window at 9pm outside my son’s football training. I missed the trick-or-treaters at our door on Halloween because I was driving him to his girlfriend’s house. My daughter is working Christmas lunchtime – not by her choice, but because it’s a condition of her waitressing contract. Such is grown-up life! And to be fair, they will get up for stockings, and we will have a lovely evening together but it will be more cocktails and chat than crackers and singing hamster toys (I won’t miss those!!!). 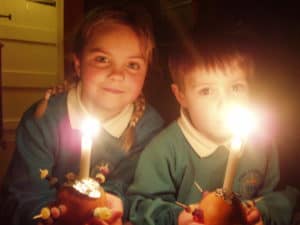 December will not be marked by a parade of Christmas crafts coming back from primary school (I wouldn’t have ever believed that I’d miss those but, oh, I so do), by Christingle or the Mummy-magic of a nativity play. Christmas will be upon us in the wink of an amazon shopping list and that’s a shame. 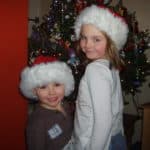 Perhaps this is where Christmas books come in? They’re a lovely way of reaching out and grabbing the Christmas spirit that comes so effortlessly to little kids. They’re a grown-up’s version of cut-out angels and dressing up as donkeys. They’re a way of reminding ourselves of the sparkle and joy of Christmas, of recapturing the excitement of opening an advent calendar every morning. They’re holly garlands and highly-decorated trees and carols, not to look good or to impress others but just for a private, seasonal tingle deep inside.

So let’s raise a glass of mulled wine to little kids, to finding the festive spirit and to Christmas books everywhere! Cheers.