Yesterday I signed my contract with Pan Macmillan to publish my trilogy – The Queens of the Conquest - and in that moment Joanna Courtney was born. 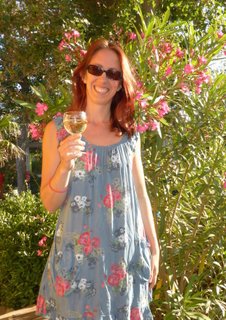 I went to bed and stared at the book I’m reading (the brilliant ‘The Secrets we Left Behind’ by Susan Elliot-Wright) and imagined my own in my hands. This is not a new dream for me. Like all wannabe writers it’s a vision I’ve cherished for years to keep me motivated but this time, amazingly, it isn’t just a possibility, or even a goal, but a reality. I may have to wait a year to hold my own novel in my hands but it IS going to happen and that’s a powerful thrill.

It’s been a long time coming. It turns out that everything they tell you about persistence and determination and perspiration and sheer bloody-mindedness is so, so true. It’s been fifteen years since I talked to my then-fiancé about changing jobs and we had the surreal conversation that’s eventually got me to this point:
‘What would you really like to do?’ he asked me as we stood in the kitchen of his grotty little flat.
‘Really like?’
‘Yes. Why not? What would you really like to do?’
‘Well,’ I told him, feeling weird even saying it, ‘there’s two things I’ve always wanted to do – one is run a bookshop and the other is write.’
‘So why don’t you?’ he asked.
‘What, run a bookshop? How would I…’
‘No, stupid,’ he said, as if we were discussing what to cook for tea, ‘why don’t you write?’

He made it sound so simple, so obvious even, and – bless him – I imagine there have been times in the long years since when he’s regretted it, but if so he’s never said and I thank him so much for that. He’s put up with tears and burbling and endless ‘that’s it, I’m going to get a real job’. He’s held me after rejection letters and forced me back to my desk the next day and he’s always believed in this madness so I’m really hoping to prove him right now.

The trick is holding onto the belief that writing is something you want to do and something that you can do and then just keeping on honing your work into something worthy of your ambitions. I’m not sure I’m at that yet but now I have a lovely editor, Natasha Harding, to help me and I’m really looking forward to having her input.

Above all else, it’s brilliant to have confirmation that I’m up to the task. I’ve been a published writer for many years in the women’s magazines and I have loved the way that securing editors’ good opinions has confirmed that I’m on the right path. Every year though, when I find myself inexorably drawn back to the X-factor auditions on TV (using the tried-and-tested ‘I’m watching it with the kids’ excuse) I have a tremor of fear that I’m like those dreadful people who arrive in ballgowns believing they are God’s gift to music and then open their mouths and produce aural diarrhoea. What if, I always wonder, it’s only me who thinks I can write? Hopefully I am now proving that’s not the case but every time I start a blank page I still believe I might have forgotten how to do it!

This is getting terribly serious and actually right now I’m feeling far more elated and excited and even giddy than anything deeper or more ponderous. I’ve been more or less living on bubbly since my dear agent, Kate Shaw (who has been with me in various encouraging guises for nearly 9 years without so much as a penny of commission until now) phoned me with the news that finally not just one but two publishers were interested in buying my trilogy. We had to pop a cork to celebrate that, then the actual offer, then the decision to accept and now the contract… It’s a miracle I’m sober enough to write anything but as my friend and very talented writer Tracy Bloom said at the launch of her fantastic book ‘No One Ever Has Sex on a Tuesday’, a writer’s successes are hard-won and you have to grab any chance to celebrate them. Advice I have embraced!

Now that I’ve filled the recycling with heavy-bottomed bottles, though, I need to get on with my editing and with creating Book 2 and I can’t wait. PanMac and I have decided to embrace a pen name I’ve always wanted to use – Joanna Courtney. Courtney is my middle name and the name of my paternal grandma who I loved to bits but sadly lost just before I was sixteen. She was an American, brought back to Britain by my grandpa at the end of World War II, and her own father, Howard Swiggett, was a very successful thriller writer in the 40s and 50s so I hope this new name links me, just a little, back to him.

So – onwards and upwards to becoming Joanna Courtney. I have a feeling that what has already felt like a long journey has really only just begun and I hope to chart it here for anyone who might be interested. All comments and thoughts more than welcome on my facebook page or via twitter - @joannacourtney1.