I love the readers of historical fiction. There are not nearly as many of them as there are of other genres like crime but they are avid and engaged readers and are always, I find, on the lookout for new novels to enjoy. That’s why I thought it would be a great idea to run a series of interviews with other historical writers so that those readers who may not yet have discovered them can have a new treat in store.

Over the next three months I will be featuring a different novelist every week and am delighted to kick off this reading-fest with Annie Whitehead, author of award-winning novels set in my favourite period – Anglo-Saxon England.

Annie’s first novel, To Be A Queen tells the story of Aethelflaed, Alfred the Great’s daughter and the Lady of the Mercians, who ruled a kingdom and fought the Viking invaders. She personally led armies into battle, and ruled a country in all but name. Over 200 years later, the Empress Matilda found that England was not ready to accept a woman ruler; this makes Aethelflaed’s achievements all the more remarkable, and yet it wasn’t remarked upon, and she was pretty much airbrushed from history. Annie had to put that right! 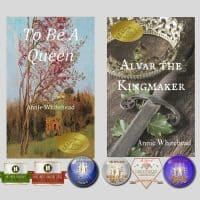 Her second, Alvar the Kingmaker is also a true story, and also set mainly in Mercia, half a century later. It concentrates on a little-known period of history which begins with the king being caught in bed with his wife and her mother, and ends with the murder of another king, a crime attributed to his stepmother, the queen. Central to the story is Alvar, Earl of Mercia. Having helped King Edgar to secure the throne, amid great unrest he then fights to clear the queen’s name, bring the country back from the brink of civil war, and stabilise the monarchy for Edgar’s son, Aethelred the Unready. He does this at great personal cost, and he soon finds that his enemies will stop at little, and that not even his loved ones are safe…

I read Alvar the Kingmaker last year and loved it and I’m not alone. Both this novel and To Be A Queen were awarded an IndieBRAG Gold Medallion and a Chill with a Book Readers’ Award, and To Be A Queen was long-listed for the Historical Novel Society’s Indie Book of the Year in 2016. Annie has twice been a prize-winner in the Mail on Sunday Novel Writing competition, won first prize for nonfiction in the new Writing Magazine, and has had articles published in various magazines. She is also an editor for the EHFA (English Historical Fiction Authors) blog. A busy and talented lady then!

I wanted to know a bit more about Annie’s life as a writer so asked her these questions:

Is Annie Whitehead a pen name?

Sort of – Annie is not my official name, I’m actually an Ann. But I wanted to use the name that people know me by. Only after my first novel was published did I discover that I share a name with a famous trombone player. Search me on Amazon and her music books come up too. The things we learn as we go along – I should have added a middle capital letter or something and been Annie L. Whitehead!

how did you become a writer?

I probably always wanted to write. I remember writing short stories when I was about eight or nine; a series of adventures about Ferdinand the Hedgehog. When I was a history undergraduate I yearned to tell the stories of the characters I was learning about. Life happened – jobs, marriage, three kids, but once the kids were at school I found the time to sit down and write, and the second book I wrote was accepted by an agency.

Getting lost in time, metaphorically and literally. I enjoy travelling back and immersing myself in a bygone age, and I love the way I can lose a whole day to it. When I emerge, when real life kicks in and I need to start cooking, or checking emails, I find that I’m refreshed. It’s almost a form of meditation.

The same thing, in a way. I find it difficult to write in small chunks, so I have to parcel off whole days in order to get anything done, and that can be frustrating at times. I also hate first drafts – when the blank page stares at you with reproach and a little voice in your head tells you that this is the moment you have finally run out of words.

Why were you drawn to the Anglo-Saxons?

I’ve always loved history, but the pre-conquest years were brought alive for me by an inspiring tutor when I was an undergraduate. I’m thankful to say that she is still a friend, and advises me even now, more than thirty years after I was officially her student. So many interesting characters jumped out of the pages of the chronicles, and at the time, I was reading a lot of historical novels. I saw these people not as uncultured peasants waiting for the Normans to release them from their ‘dark ages’ lives, tormented by dragons and elves, but as real medieval characters whose stories are seldom told.

My second favourite period of history is the seventeenth century, but I’ve never been tempted to write about it, even though I love to read books set in this period. If I’m honest, I’m a little daunted by the prospect of researching a completely different period!

What do you think is the appeal of historical fiction?

That’s an interesting question. My immediate answer is that it takes the reader into a different world, but then all good fiction should do that. Is it the romance of a bygone age which appeals? As long as people remain interested in the past, and want to read about it, I’m happy!

If there was one thing in history you could change what would it be?

Recently I joined you, Joanna, in the 1066 Turned Upside Down project, in which nine of us took an event of that momentous year and rewrote it. It was a fascinating exercise, and I had a lot of fun imagining “What if.” But would I change the outcome of the Battle of Hastings? That would be an indulgence; if you gave me one chance really to change history, I think I might opt for something more humanitarian, such as stopping the rise to power of Adolph Hitler.

So that’s Annie in a nutshell. Do check out her books:

To Be a Queen, Alvar the Kingmaker, 1066 Turned Upside Down

Or pop over to my own Joanna Courtney facebook page to discuss Annie's work further or ask any questions. See you there...