Who said the Christmas tree was a twentieth century invention?
Most of the festive traditions we know and love stretch right back into Anglo-Saxon times – including the tree. 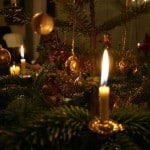 Christmas Trees
Edward’s men had set up a new-cut fir, almost as tall as the roof beams. Boys were balancing on their fathers’ shoulders to tie charms and pastries to the highest branches whilst smaller children eagerly did the same further down, making the whole tree come alive with colour.
It’s widely held that Prince Albert, Queen Victoria’s German husband, brought Christmas trees to England. Not so. What he actually did was to bring them back to England. The tradition of bringing a tree into the great hall at Christ’s Mass was from the fir-strewn Norse lands and probably came to us with the first Angle and Saxon settlers. Somewhere along the line this tradition was lost in England (perhaps thanks to the Puritans who were suspicious of all decoration) but as it remained in Germany, Prince Albert knew about it and was able to re-introduce it during Victoria’s reign.
The tree was decorated with fruit (usually apples), pastries, biscuits, ribbons and baubles, cut, as today’s decorations often are, in the shapes of angels, hearts, stars, flowers and bells. It also seems likely that gifts were placed beneath the tree, so Anglo-Saxon children would have experienced much the same early-morning excitement as ours do today. 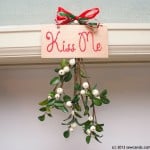 Mistletoe, Holly and Ivy
Westminster hall was old but its cracking timbers could barely be seen tonight for the rich swags of greenery hung along the walls and wound around the pillars. Entwined with ribbons and studded with painted wooden baubles, the hollies, firs and ivies shone in the myriad rush lights set carefully above them to avoid fire.
The pretty word ‘mistletoe’ is actually derived from the rather un-poetic Anglo-Saxon meaning: dung-on-a-twig! Pagans, especially Druids, saw mistletoe as a powerful plant, as they believed that it sprang from dung (in fact it was the seeds embedded in the dung that carried the new life). As such, it was a symbol of fertility, and so led naturally to kissing. The early church tried to discourage this wanton practice and persuaded people to bring holly in instead, as the prickly leaves could be seen as a symbol of Christ’s thorns, with the berries as his blood. They were partly successful, as people did embrace the use of holly, but they also held on to the mistletoe, so both became traditional.
Ivy seems to have been used more often as a decoration outside the hall, perhaps around the door, for there was some superstition about its ability to cling to things and therefore suck the soul out of people. An abundant plant, however, it may well have been brought inside too. As with mistletoe, the church discouraged its use but this was almost certainly ignored by those, like us, cleaving to continuity and tradition for their Yule/Christ’s Mass celebrations. 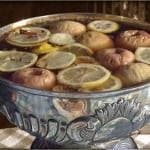 Wassail-cup
‘Isn’t this marvellous?’ Alodie bubbled. ‘There’s a woman selling the prettiest beads over there and another with ribbons of so many colours, and there are chestnuts on the fire and the most delicious spiced tarts and a wassail cup too. It’s like heaven!’

The term wassail comes from the Old Norse ves heil, or Old English was hál – ‘be you healthy’. Originally an everyday greeting, at some point it developed a reply, ‘drink hail’, and became linked to celebration – the earliest form of ‘cheers!’ Wassail is a form of cider, made in a variety of ways depending on local custom and the skill of the brewer. At its simplest, it was a base of mead (honey ale) into which crab apples were dropped. These burst during fermentation, releasing their flavour into the drink and leaving a pulp that gave wassail the disturbing nickname of ‘lamb’s wool’.
Alongside wassail, Anglo Saxons liked to drink mulled wine and, indeed, mulled ale, quite simply (in the absence of tea and coffee) as a way of keeping the cold at bay. These drinks could be heated either in a pot over the fire or by the very simple expedient of thrusting a hot iron poker into your mug. Indeed, the German term Glühwein translates as ‘glow-wine’, from the glowing hot irons used thus.
Wine was largely imported, (although, as the climate was warmer, there are records of vineyards as far north as Ely), so mainly drunk by nobles. Spices and fruit were added during the twelve days of the Christ’s Mass feast for an even more luxurious drink. Home-grown fruit would have included sloes, cherries, plums, apples and raisins but spices had to be imported from Constantinople so would have been rare and costly in England and only drunk by the rich. 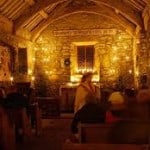 Twelve Days of Christmas
‘I think you are my Christmas miracle,’ she said softly and then his lips were upon hers and she lost herself in them, drawing him fiercely in against her as if he were rich mulled wine in the ice.
‘Wherever I am,’ Freya told him when finally they pulled apart, ‘and whoever I must be with, I am yours. I swear it before Christ on this, the glorious day of his birth.’
These twelve midwinter days (25 December to 5 January) were officially designated as a period of celebration for Christ’s birth by the Council of Tours in 567 to try and eliminate the pagan festival of Yule. They were established as a core Christian holiday by King Alfred’s time in the late 800s but the actual, official day of ‘Cristes Maesse’ on 25 December was first recorded in the 1030s.
In Anglo-Saxon times, days were marked out by the ‘canonical hours’ at which monks said mass. Matins was the first service of the day, so the Christmas Eve midnight mass, still attended by many today, was the official start of the glorious day and gives its name to it – Christ’s Mass. 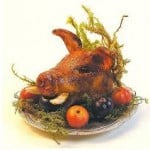 Boar
‘A golden cup for the man who spears a boar!’ King Edward cried and the hunters roared approval. Boar, the traditional beasts for the Yule table, were wilier than deer and more likely to fight back. It took skill and bravery to skewer one but the men were keen for the challenge.
There was no turkey in Anglo-Saxon times as it wasn’t introduced into England until the sixteenth century (popular history says that Henry VIII was the first English monarch to eat it for Christmas) but there was still a big tradition of feasting. Peacock was sometimes served but the usual mainstay of a wealthy Anglo-Saxon’s Christ’s Mass feast was boar. Boar were notoriously hard to hunt, being bad-tempered and prone to attacking their attackers, so presenting one on your table, head and all, was a sign of prowess and wealth.

So this Christmas, as you drink your mulled wine in the light of your tree with your mistletoe over the door, think back for a moment to your ancestors, one thousand years – they were probably doing much the same. Wes hail!!

And if you fancy a festive read to get you in the mood, why not try The Christmas Court - a light, Christmassy romance novella set in the court of King Edward in 1051. At only 98p it's a bargain present to yourself.